Información breve
Comida y bebida
Whether simple or sophisticated: Austrian cuisine is diverse and imaginative. As there is a great selection of restaurants everywhere on this journey, we do not offer half-board. A typical dinner costs between 10-20 € per person, but there are also cheaper or more exclusive restaurants available.

Wachau tour - based in one hotel 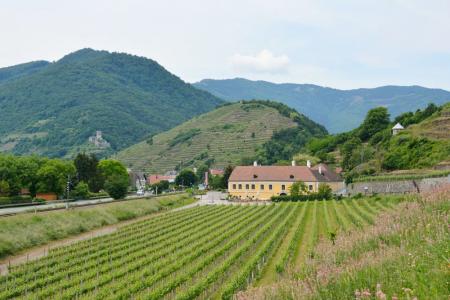 Time to savour: The starting point of your bike tours is the medieval town of Krems. Let your mind roam free while cycling past the charming vineyards of the Wachau region, discover the orchards in the Mostviertel (perry district) and the enchanted landscape of the Waldviertel (forest district). Explore the region along the Danube with the magnificent Melk Abbey, the picturesque town of Dürnstein and the Roman town of Tulln. The Lower Austrian capital St. Pölten also has a lot to offer. Take a break at one of the many Heurigen wine taverns when it’s time to say: "Ausgsteckt 'is" – the wine is tapped. This tour "Wachau - based in one hotel" runs along excellent bike paths and, despite the hilly landscape, it’s also suitable for less experienced cyclists.

Day 1 Arrival in Krems
Start with a stroll through the historic town centre or with a short bike excursion to Göttweig Abbey (approx. 15km).

Day 2 Excursion to St. Pölten, approx. 40 km/25 mi
The train takes you to the baroque state capital of St. Pölten. The Traisental cycle path leads gently downhill through the Mostviertel with orchards full of pears.

Day 3 Excursion to Melk, approx. 40 km/25 mi
By ship you’ll reach the impressive Melk Abbey, before cycling back through the Wachau, with its orchards, vineyards and idyllic towns.

Day 4 Excursion to Rosenburg, approx. 40 km/25 mi
You’ll head north by train to Rosenburg with its picturesque Renaissance castle. You’ll cycle along the river Kamp and through the rugged Waldviertel. It is worth stopping in Langenlois for a wine tasting.

Day 5 Excursion to Tulln, approx. 45 km/28 mi
Along the Danube you’ll cycle to Tulln with its Roman museum and the "Garden Tulln". Athletic cyclists can extend the tour to Vienna before returning by train.

Day 6 Departure
After breakfast, your tour "Wachau - based in one hotel" concludes.

Included in your package "Wachau - based in one hotel":

All prices apply per person in a double room, incl. breakfast.

All prices apply per person in a double room, incl. breakfast.